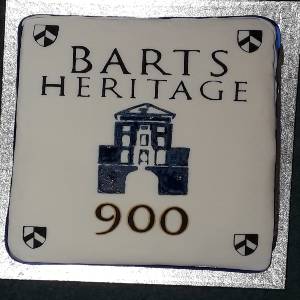 King Charles 111 visited Barts yesterday, 23 November 2022. He joined Barts Heritage to celebrate the success of their project appeal. His Majesty visited the historic North Wing of the Hospital, where he met with conservators working on the William Hogarth paintings on the staircase leading up to the Great Hall.

Pru Griffiths, a former League committee member and long-term member of the League was asked to make a celebration cake! She managed to keep the secret and surprised the Executive Committee with the remains of the cake to enjoy whilst we held our regular executive committee meeting, an absolutely delicious cake that we hear the King enjoyed too. well done, Pru!

In Pru’s own words!

” When the President asked the League Executive if anyone knew of a good cake maker, Hilary Mathews said ‘Well, Pru does but it depends on what you want’.

There followed phone calls from Elizabeth and Will Palin asking me to make a cake for the King. Although Will was very relaxed about it, I wasn’t!

I decided on a carrot cake- thinking of King Charles’ love of horticulture and I also thought it would keep moist.

There was a lot of preparation, as you can imagine, and on the day, I got a train and taxi carrying this huge cake. Everyone I met asked me who/what it was for, but Elizabeth and I had been sworn to secrecy.

While waiting in the Great Hall for the King to arrive, I talked to the architect, archivist, artist, harpist and several interesting attendees.

King Charles spent a lot of time talking to the Lord Major and patrons and really seemed to enjoy his visit, seeing proposed plans for the hospital and a restorer in action.

The King asked what kind of cake it was and asked if he could take some home – which he did!

I did get to mention the League and he asked me if I was still nursing – very chivalrous considering I’m 72.

Although it had been a bit of a daunting commission, King Charles made it relaxing and pleasurable.

Definitely a once in a lifetime experience.” 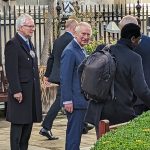 King Charles in the Square