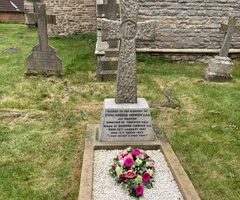 A special service of thanksgiving was held on Friday 20 May at Thoroton Parish Church, Nottinghamshire.  The service celebrated the life of Ethel Gordon Fenwick SRN – and recognised the restoration of her grave in the grounds of the church.  The service was the culmination of over 5 years work by the Ethel Gordon Fenwick Commemorative Partnership, a group of nurses and other interested parties who collectively sought to raise the profile and status of State Registered Nurse number 1, chaired latterly by League President Elizabeth Wood Dow OBE.

The service was led by the Dean of Southwell, the Very Revd Nicola Sullivan (a former Barts nurse) and the Revd Tim Chambers, Vicar of the Cranmer Group, Elizabeth Wood-Dow read the lesson and the address was given by the Bishop of Southwell and Nottingham, the Rt Revd Paul Williams. Children from local schools also took part in the service.

A Deputy Lieutenant of Morayshire, attended to recognise Ethel’s Scottish roots.  Other attendees included Howard Catton Chief Executive of the International Council of Nurses, Andrea Sutcliffe, Chief Executive of the Nursing & Midwifery Council, Dr Crystal Oldman Chief Executive of the Queen’s Nursing Institute, and Teresa Budrey, Regional Director Royal College of Nursing as well as some staff from local hospital trusts.  The League was well represented by members who live in Nottinghamshire together with Alison Harvey and the Rt Hon Anne Milton members of the EGF Partnership Group.

****Born Ethel Gordon Manson in Morayshire in 1857 she is considered to be one of the foremost leading figures in nursing. Ethel moved to Thoroton Hall at a young age after her widowed mother married George Storer, MP for South Nottinghamshire. She commenced her nurse training at the age of twenty-one, firstly at Nottingham Children’s Hospital and then Manchester Royal Infirmary.  She went on to work as a Sister at The London (now Royal London) Hospital and was Matron at St Bartholomew’s Hospital London for six years.  It was at Barts that she met and married Dr Gordon Fenwick and her career as a nurse came to an end, because in those days women could have a family or a career but not both. As a prolific writer, Ethel acquired the Nursing Record in 1893 and became its Editor in 1903. It was renamed the British Journal of Nursing, and through its pages for the next 54 years her thinking and her beliefs were clearly revealed.

Disagreeing with Florence Nightingale, Ethel believed that there was a need for the training of nurses to be at a recognised standard, for which she campaigned vigorously.  Her campaigning eventually resulted in the Nurses Registration Act 1919 and Ethel appeared as “Nurse No 1” when the register first opened in 1921.

Ethel founded the Royal British Nurses’ Association in 1887, as well as several other nursing organisations. In 1899 she was instrumental in the foundation of the International Council of Nurses, now based in Geneva.  They now represent over 27 million nurses worldwide****